It is well documented that Oskar Kokoschka travelled to Africa from January to April 1928 to Tunis. It is also described that he was accompanied by Helmuth Lüthjens (1893-1986) from his gallery Cassirer. At this time Lüthjens made lots of photos which were also exhibited at the exhibition „Kokoschka-Das Ich im Brennpunkt“ at the Leopold Museum in Vienna in 2013 (the catalogue of this exhibition is as well the source of information)

On this journey, Kokoschka made his famous painting of the market in Tunis, what he finished later in 1929 according to Lüthjens.

Anna Kallin, his girlfriend at that time was in London and mentions in her letter to Mr. Schmitt „ …Kokoschka and myself have been to Paris several weeks, one week ago he has travelled to Tunis , again a hard landscape journey under the custody of a Cassirerian Dragon“ – I am sure she meant the above mentioned Helmuth Lüthjens. She further writes „…in autumn he will have exhibitions in London and Paris- ultimately!“

Hermann Schmitt (https://de.wikipedia.org/wiki/Hermann_Schmitt) was Director in the ministery of interior in Dresden and had as well a close relationship to Kokoschka since the beginning of Kokoschkas time in Dresden at the academy of arts. 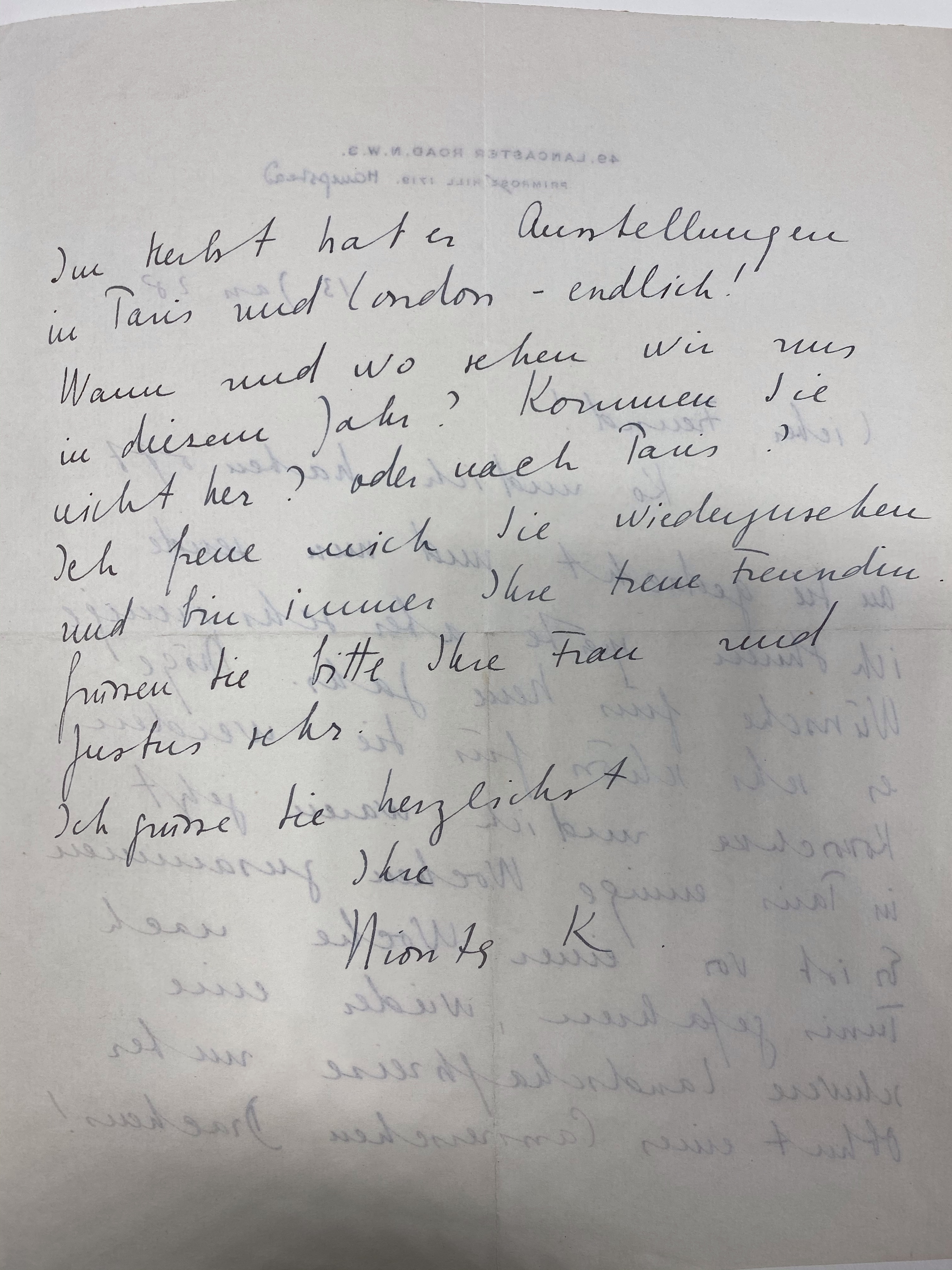 It has been a long time i did not write and I am happy to be able to do it again. I hope you like what you see and read here.

I recently akquired a photograph signed by Marc Chagall in Kokoschka´s garden in the Villa Delphin in Villneuve in Switzerland. For a long long time I was looking for something like this. As you might know there are so many forged signatures from Chagall on the market I was simply not able to find one for my collection which attired my attention. Now this one comes from the estate of Dr. Edgar Horstmann , a very good friend from Kokoschka and art collector.

Horstmann moved to Hamburg in 1946, where he got a chair at the university der Bildenden Künste. He intensively studied life and work from Kokoschka and also wrote a book called “Oskar Kokoschka in Hamburg” . Oskar Kokoschka liked to work with students and did that as well in Horstmann’s classes. He dedicates the photo ” at your school dear Edgar- it was good and lively”. It is so nice to find such witnesses of time showing the inner enthusiasm of Kokoschka to talk with young students how they can find their way to express themselves .

I did not find too much information yet about the relation between Kokoschka and Chagall but as we can see, they also privately kept contact. On the photo Chagall seems so happy to watch the things in the garden. I like the sphere in this unusual and private scene ..

Stay safe and keep happiness about the little things in life! As Chagall seems to do it in Kokoschka’ s garden.

Georg Eisler was an important austrian artist whose works are part of important collections of museums like Albertina in Vienna, British museum or National Portrait Gallery in London.  He had a great teacher and supporter : Oskar Kokoschka. Georg Eisler met Oskar Kokoschka 1944 in London at the time of Kokoschka´s exile. The letter I show here is from 1946 (Georg Eisler was at the age of 18(!)) and Kokoschka already saw the big talent of Georg Eisler at that time. Kokoschka writes  recommendations how to continue in order to be and become an artist. “I mean, that the Academy of Fine Arts or – in case it is not existing anymore – another institution should help you to study several years until you think you can stand on your own feet. You have enough talent for that …” Kokoschka mentions, that Eisler has ” the modesty in the judgement of his own prospects and constraints of his own capabilities..” At the end of the letter he asks Eisler for “…do not forget of the little ones, the youth of Austria, which to help our most important duty is… doing that an artist can prove oneself … in a truthful social task” 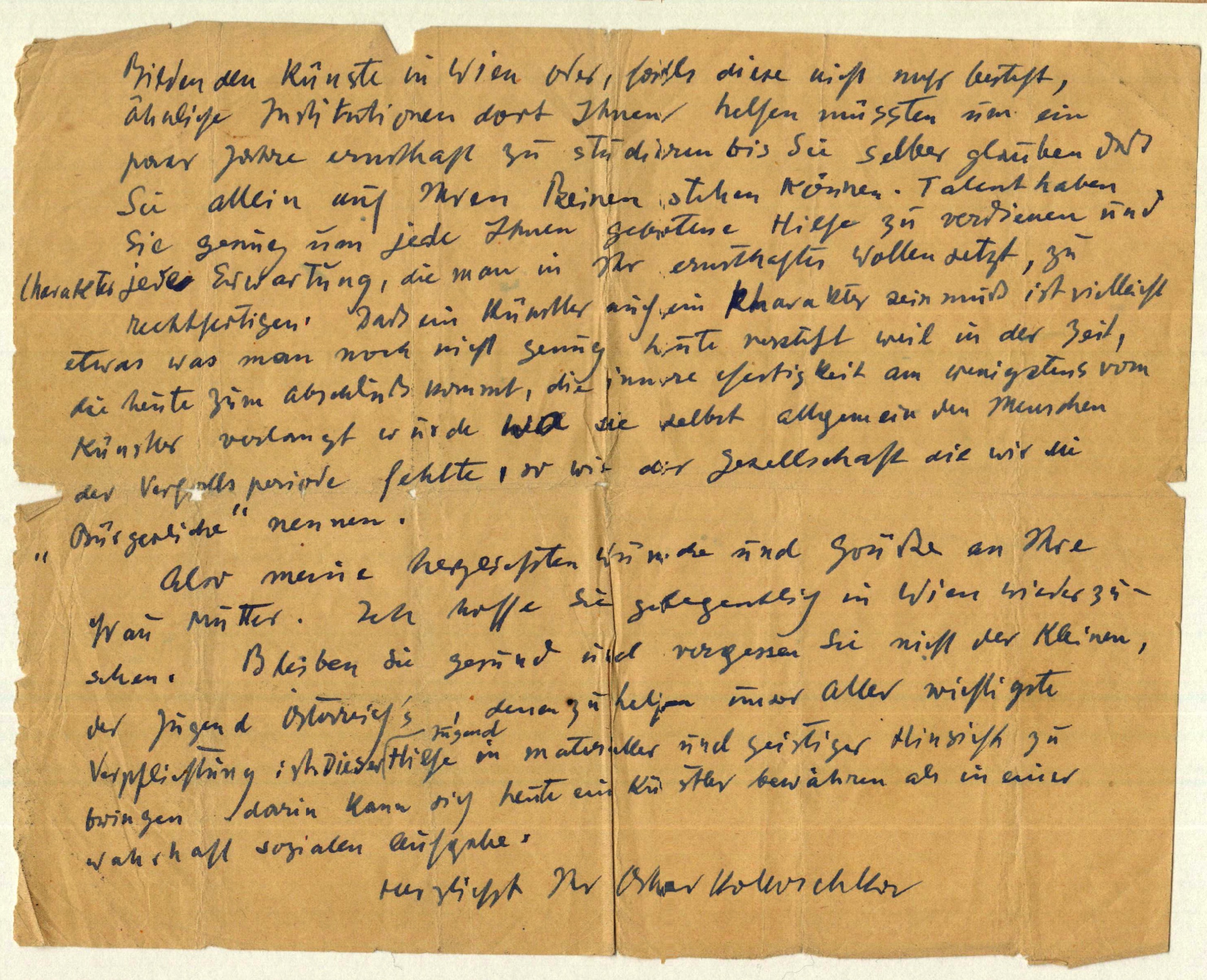 I was a bit , let´s say “shocked” when I read the letter from Oskar Kokoschka – even in his lifetime lots of fakes (or “paintings wrongly attributed to him ” ) were already “cruising” in the Art-world. I do not want to know how many there might be out there today! So watch out when you are planning to buy a Kokoschka … 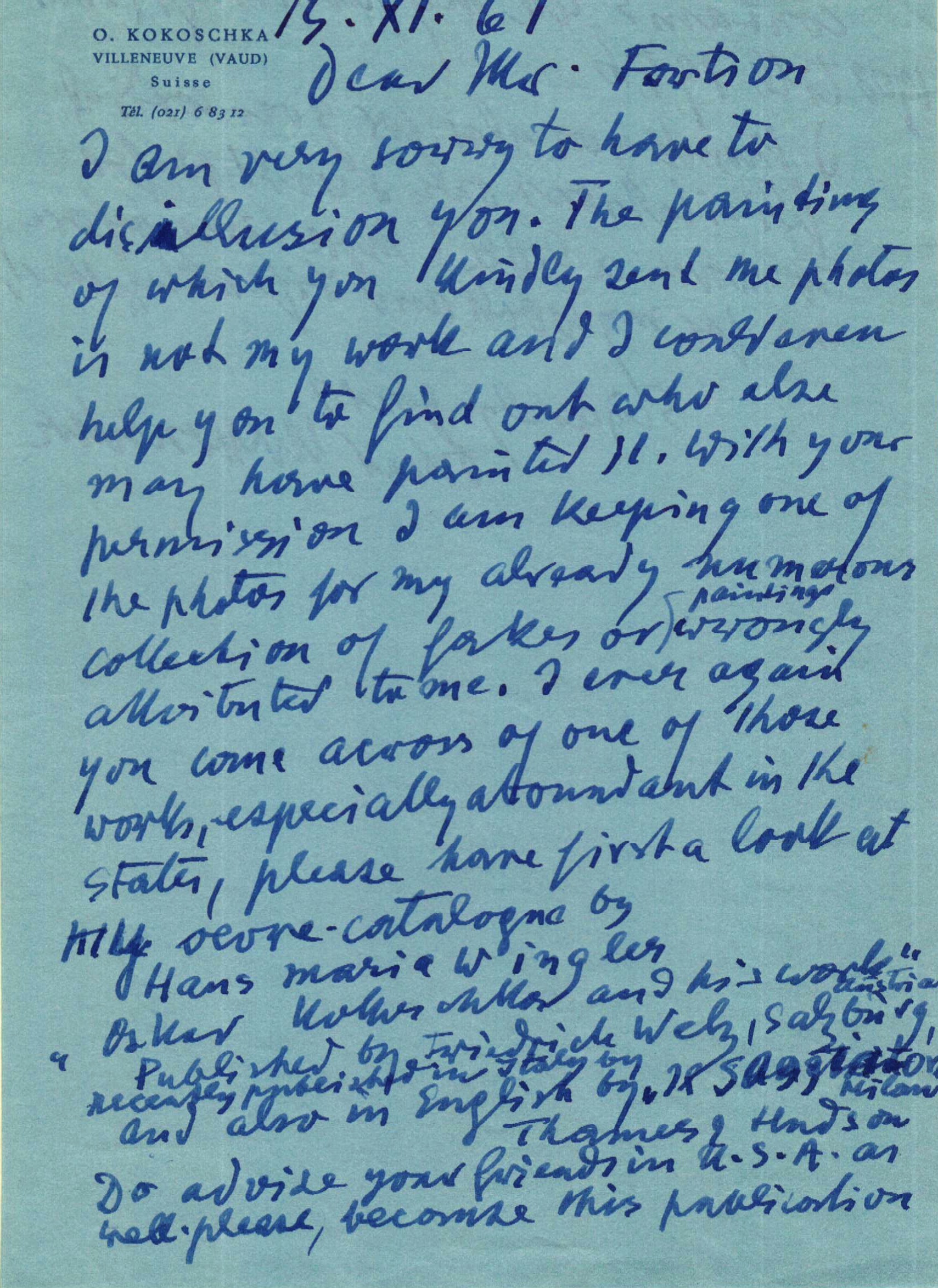 Die Zauberflöte production that Wilhelm Furtwängler had prepared with the painter Oskar Kokoschka for the Felsenreitschule was taken over by Georg Solti. Werner Egk’s Irische Legende (“Irish Legend”) received its world premiere under the baton of George Szell, while Rudolf Kempe gave Salzburg its first hearing of Pfitzner’s Palestrina. The ballet of the Vienna State Opera presented four evenings devoted to contemporary scores: Stravinsky’s Perséphone and Honegger’s La Danse des Morts. Behind the scenes a battle raged for the successor to Furtwängler, who had dominated the Festival in its recent years. A duel soon emerged between Böhm and Karajan. Official negotiations with Karajan began in the autumn. Karajan raised far-reaching demands, wishing not only to function as a conductor but as a stage director. He also demanded the position of artistic director with full authority on all questions related to casting and programming. The Festival had never seen the like before! (Text from http://www.salzburgerfestspiele.at/history/1955)

The photograph shows Oskar Kokoschka mentioning his work in Salzburg. A nice historic document to this event, which I got for my 40th birthday .