“Christian Ludwig Attersee was born in 1940 in Bratislava/Slovakia and moved
to Austria in 1944; today he lives in Vienna and Semmering in Lower Austria.
Attersee spent his youth in Aschach near Linz and in Attersee, Upper
Austria; he was one of the great sailing sportsmen of Austria – thus his nom
de plume Attersee. He made his name not only as an artist in the fine and
visual arts, but also as a musician, writer, object maker, designer, set
designer and film maker.
Attersee is noted first and foremost as one of the leading exponents of
objective painting in Europe during the last 50 years; he is a lone wolf in
nearly all fields of the visual arts.
First exhibitions starting in the mid-sixties bring success, also the
friendship and collaboration with artists like Günter Brus, Gotthard
Graubner, Jörg Immendorff, Markus Lüpertz, Hermann Nitsch, Walter Pichler,
Dieter Roth, Gerhard Rühm, Oswald Wiener et al.
Ever since Attersee’s first objective inventions (1964-66) in the sphere of
eroticism and everyday he has been appraised as an independent influence
alongside other artists in European pop art.
Attersee is the great lone wolf of Austrian art of the sixties, counterpole
to Viennese actionism. In the second half of the seventies, Attersee was the
founding figure of “New Austrian Painting”.
In 1984 Attersee represents Austria with extraordinary success at the
Biennale di Venezia. (…)”

On my blog I want to show to you a small sketch which he was drawing into the exhibition catalogue (“Attersee: Das Schachfleisch”. Galerie Hilger / BROT Kunsthalle, Wien) in 2013. This catalogue has a trade edition of 1000. THANK YOU, Mr. Attersee for this nice sketch! 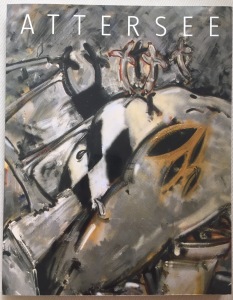 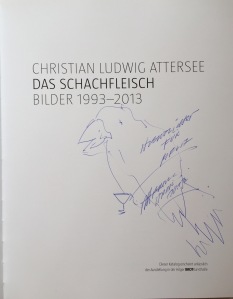