Today I would like to introduce the Austrian artist Christian Eisenberger to my audience. According to artfacts.net, he is actually ranked at #1363 (he came from #10000 in 2005).

I show you one of his catalogues “Reserve” (Editor: Markus Gugatschka) signed with a small sketch (on the first & last page of the book). 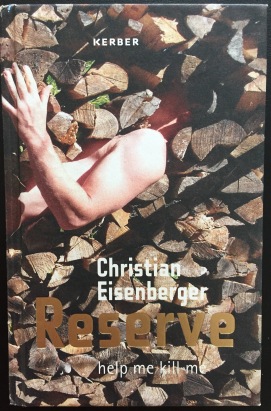 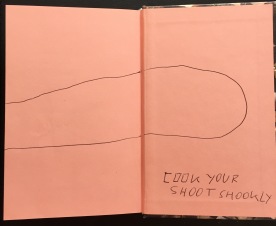 Christian Eisenberger was born 1978 and lives & works in Vienna/Austria.

Martin Titz wrote about him in 2010: “Christian Eisenberger is scanty with words and rich with ideas. He is one who reaches into life clear past the elbows. The pool, out of which he creates, is endless, for this pool is nothing less than the world in all its parts. Eisenberger practices his art, namely, in earnest (as opposed to “ironically”) as an appropriation of the world in which he uses and transforms what a place offers, a place that others might not even give a second glance. It is a world of simple things, beyond its use- and exchange value, a chaotic universe made of packages, pornographic images, incense sticks, circulated postcards, worn-out vinyl records, pinecones, suspenders left lying around, ultrasound images of fetuses, pictures of his grandfather and of Marilyn Monroe, tape en masse, hair cuttings from the hairdresser, comments from passers-by and every kind of color; in a nutshell, everything that there is serves as his material. Well, for what use? For new elements of the world that belongs to art’s distribution system: odd stuff like cement sausage dogs on deer legs, Christian crosses and David – the communist star made of water scales – “Guten Morgen” greetings made of cow dung, tape-constructed cocoons, which he slips out of, shedding it like an old skin, in accord with his daily metamorphosis as artist.

Wherever Eisenberger may go, he finds the material for his works already there. He always takes it from his direct environment. Whether in nature or the train station, everything that is handy is used, transformed. That is why all labels such as “Land art” or “Street art” come up short, because Eisenberger’s steadfast, artistic show of strength, even his daily studio work, carries the character of an ongoing performance, in which the working process becomes more important than the result. The artist works often in series, experiments with ideas and materials until he has become weary of them and allows his works to become increasingly loose and unformed. In his exhibitions he likes to recall earlier formations, to vary and recombine them, thereby going to the borders of resilience of both the material and the artist. In 2008 he built an observation tower into the Viennafair using tape and filigree wood slats and invited visitors to contribute all of their physical input to follow him up to the dizzying heights.”